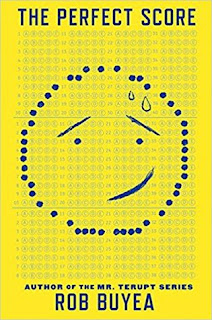 Featuring a mixed up group of sixth graders, this novel explores the struggles faced by each student and how they evolve to become better human beings by their teachers. When they first enter class, the students discover their assigned teacher is replaced by retiree Mrs. Woods, a no-nonsense straightforward educator. Along with her, they will learn math and science from Mrs. Magenta, a more relaxed and care-free individual. For most of them including Trevor, Mrs. Woods is an unwelcome sight. She taught some of their parents so they know her practical and non-lenient nature could make the school year a hard one. Others, such as aspiring future lawyer Natalie can't grasp Mrs. Magenta's teaching approach. The novel's chapters alternate between the main characters: Gavin, who has trouble reading certain words; Randi, who is forced by her mother to become a gymnast;
Scott, an overall good kid with good intentions that don't always
seem to go right; Natalie, the daughter of lawyers who lives with a strong sense of right and wrong; and Trevor, considered a bully by his peers although no one is aware of what he must endure at home. As mandatory tests arrive, the six devise a plan to ace the tests so they can continue to learn in their current setting and have a better chance of placing in the upper Grade 7 level class for the following year.

Posted by DeepikaT at 17:17 No comments:


The Magic Misfits is a fun, quirky middle grade book by actor Neil Patrick Harris. It begins with Carter, a young boy who lives with his Uncle Sly, a street con artist who forces Carter, a young magician, to assist him with his pick-pocketing. Having had enough of his uncle's dishonest ways,Carter takes a chance and runs away on a train leaving town.

Not sure where he is headed, Carter leaves the train when he sees a sea of circus tents in a little town of Mineral Wells. Heading to the circus, where he can hide amongst the crowd, Carter encounters B.B. Bosso and his unruly, band of crooked con artists.


Meeting Dante Vernon, a local illusionist, leads Carter to his first real family and a group of magic misfits who quickly become his friends. Using each of their magical skills, this diverse group of pals; Leila, Ridley, Theo, Olly, Izzy and Carter unite to thwart the villainous exploits of Bosso and his thugs.


This is a fun read that is more than the story of Carter and his magical friends. Each chapter includes magic tricks the reader can try at home, secrets and codes to crack. The book speaks to you in Neil Patrick Harris' inimitable chatter and is sure to delight his fans and those new to his writing.

Willliam Wenton and the Impossible Puzzle


William Olsen has been living in Norway for the past eight years.  When William’s grandfather disappeared, William and his parents had to leave England and now they are in hiding.  William longs to know the secrets that sent his family underground.  He also longs to go back to his real name: William Wenton.

When William hears that The Impossible Puzzle is coming to the History of Science Museum, he can’t wait to attend.  He loves deciphering codes and puzzles, and the world’s best cryptographers can’t solve this one.  But William’s mother is worried; she warns him not to draw attention to himself at this exhibit.

But William can’t help himself – when he gets the chance, he has to try solving The Impossible Puzzle.  Too bad his skill with code-breaking makes him the centre of attention.  Before he knows it, William and his parents are forced out of their house with something chasing them.  William barely escapes with his life!

He finds himself being whisked away by strangers.  He arrives at the “Institute” where he quickly becomes a student of sorts.  He soon learns that the Institute has links to his missing grandfather.  Can William finally solve the mystery of his grandfather’s disappearance?  Will he discover his family secrets once and for all?

This action-packed novel is full of code-breaking, robots, high-speed chases and adventure.  If you love a suspenseful thrill ride, this book is for you!

Posted by Christine at 20:32 No comments:

In a small plane, four children travel over the Amazon jungle.  Each has a good reason to be on an excursion without their parents and will meet their adults at their destination.  But when the pilot has what appears to be a heart attack, Fred, Con, Lila and her little brother Max find themselves alone in the jungle with the wreckage of a plane.

The four city children are out of their element.  Fred and Con, in fact, come from “proper” British backgrounds and have never been allowed to explore.  Both have always behaved “sensibly”.

But Fred adores explorers and has read many books about them.  His book knowledge allows him to figure out how to survive in the jungle.  Lila, too, has some survival skills.  The children manage to build a shelter and a fire.  Food is scarce, but Lila’s knowledge of animals and the natural world helps keep them safe.

Then they find a map.  “X” marks the spot and the four survivors decide to follow the map to its conclusion.  What they don’t expect is to find “the explorer” at the other end.

In an ancient and forgotten city in the middle of the Amazon jungle, the children meet the explorer.  He wears furs, eats practically anything and knows his way around.  He is also arrogant with no desire to have children or anyone else around.  But when one of them becomes ill, only he can help the children find their way back home.

The Explorer is, first and foremost, and adventure story.  But it will also make you believe that anything is possible and that you are much more capable than you think.

Highly recommended!
Posted by Christine at 16:44 No comments: