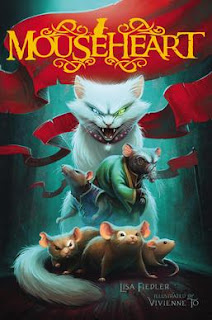 Hopper lives in a Brooklyn pet shop with his sister Pinkie and little brother Pup. All he's ever known is the inside of the pet shop until the day the boy with the snake comes. The boy's snake is hungry and when the pet shop keeper comes for them, Hopper realizes they are feeder mice, ready to be fed to the boy's snake! He quickly hatches a plan with his sister to escape their cage and in all the commotion they lose sight of Pup, who was tossed to the ground during their daring escape. Soon, even Hopper and Pinkie are separated and Hopper finds himself in an underground tunnel. He feels hopeless and alone until he meets Dodger, a rat prince from the city of Atlantia. Hopper's awe at this magnificent place overwhelms him; he settles in and believes he's made it home. Unfortunately, Atlantia harbours a dirty secret with its' refugee camps and it is Hopper's destiny to liberate the inhabitants after the truth is revealed.

While there was some violence, I've read Brian Jacque's Redwall and find Mouseheart to be less gruesome. Swords and other armory do make an appearance to enhance the plot scenes.

Posted by DeepikaT at 14:24 No comments:


What a wild book this is!

Twelve-year-old Alistair Cleary is befriended by one of the neighbourhood “weird kids” – Fiona Loomis.  Fiona has a secret to tell Alistair and she trusts him not to tell – she is regularly transported to a fantasy world called Aquavania.  In this magical place, Fiona, and the other kids who travel there, can create their own worlds from scratch and visit each other’s worlds when they are invited.

But Fiona fears for her life.  Children from Aquavania have been disappearing – they go missing in Aquavania but never reappear in the “solid world” either.  She learns that Aquavania has a monster – he’s called the Riverman, and he steals children’s souls.  Once Fiona’s friends disappear, she thinks she might be next.

Of course Alistair does not believe Fiona’s crazy story at first.  In fact, as he and Fiona become close friends, he comes to believe that her story is really a cry for help.  Something terrible is happening to Fiona in the real world, and she is making up stories about it so she can share her burden.

As time goes on, Fiona’s story seems more and more plausible, and soon Alistair must help find the Riverman.  He must be the one to save Fiona before it’s too late.

The suspense in this story builds steadily to a grand crescendo.  Although the tale is dark, it is also set in an average suburban neighbourhood in 1989.  It feels like these events could really take place and that anyone you know could be involved.

The Riverman is full of fantasy, friendship and the trials and tribulations of pre-teen kids.  An excellent novel!  Recommended for ages 11-13.
Posted by Christine at 14:01 No comments:

Eco Warrior is a wonderful tale about a sixteen year old boy named Alfred that pulls you in right away and keeps you reading from page one to the end. Alfred is traveling to Australia in a homemade submarine with his pet seagull and dog to learn how to be an environmentalist and save the oceans. On the way Alfred learns many life lessons and meets new friends for life. After Alfred arrives in Australia he gets mistakenly accused of sabotaging a tanker and has to make a daring escape with the help of a friend. Because of that Alfred makes his way over to Tasmania to see if he can help the Sea Shepherd Society battle tankers that supply Japanese whale hunters with fuel for their ships.

Eco Warrior is short book that outlines the dangers that our oceans are in and shows that it’s still possible for us to make a change. You do not need to read the previous six books in the series to enjoy this one. Overall, Eco Warrior is an engaging book that never leaves you in a dry spot. And guess what? The Sea Shepherd Conservation Society is real! Take a look at this site to find out more: www.seashepherd.org.

Eco Warrior is a Red Cedar Award nominee this year. Each year, students just like you vote for their favourite fiction and non-fiction B.C. books. You have until the end of April to read, read, read! Then the winners will be announced at a Gala in May. Visit redcedaraward.ca to learn more about B.C.'s Red Cedar Award and see a list of nominees.
Posted by jarpl at 16:27 No comments:


One of the new Elephant & Piggie Like Reading books, We Are Growing by Laurie Keller entices emerging readers to keep practicing their skills once they’ve finished all the books in their beloved Mo Willems series.

With high-impact, brightly coloured and cartoonish illustrations, simple text and larger than life sounds throughout (“Ping! Bam! Zap! Whee!), We Are Growing tells the story of a bunch of blades of grass, all of whom are growing up in their own special way.  Each one has a prominent trait that makes it unique from all the others.  One is the tallest, another is the curliest, another is the silliest, and so on.

Just like kids, each blade of grass is distinct from the other and keeps growing like, well, a weed.

We Are Growing is engaging enough to do what it's designed to do: keep kids reading.
As Elephant says, “I love to read.”  “Me, too,” says Piggie.
Posted by Christine at 21:15 No comments: