The City of Ember


At age 12, Lina Mayfleet and Doon Harrow are finishing school and ready to begin working.  In the City of Ember, everybody works and contributes to the efficient running of the city.

But city progress is faltering.  Ember is a city of darkness.  Its citizens rely completely on artificial light.  The lights come on in the morning and go out when it’s time to sleep. Rumour has it, however, that lightbulbs are beginning to run out, and blackouts are becoming more and more common.

Canned food is also getting scarce as the vast storerooms of Ember are emptying out.  Fresh food is grown in greenhouses using artificial light, but disease is starting to rot some of the produce.  Ember is in crisis.

Lina and Doon are determined to help find a way to save the city.  When they discover an old box in Lina’s closet with partially destroyed instructions inside, Lina and Doon believe they may have found the answer.  But will anyone listen to a couple of kids?

Jeanne DuPrau’s City of Ember is a survival story with a twist.  The city itself is fascinating, and children will be captivated by the small details of life in a city of darkness.  Kids will also love the heroism of the two children who act boldly to do what they feel is right.
Posted by Christine at 09:00 No comments:

I must warn you that this one really scared me as a child. Even though I was scared I would ask my Mom to read it to me again and again. This classic Roald Dahl adventure follows a young boy and his grandmother as they hatch a plot to rid the world of witches. This novel is also a movie directed by Nicolas Roeg. At Richmond Public Library we have this wonderful tale available in book, CD book, and eBook.

Roald Dahl opens this book with some important information about witches, real witches. For example real witches dress in ordinary clothes and live in ordinary houses. Real witches hate children and spend their time plotting how to get rid of children. With each chapter the reader is taken deeper into a world of witches and magic potions. Follow our young hero as he narrowly escapes their grasp with a little help from his loving grandmother.

Come and enjoy The Witches a cautionary and adventurous tale of friendship, family and fun. Pick up a copy at your nearest branch today!
Posted by Unknown at 13:50 No comments:

The War that Saved My Life 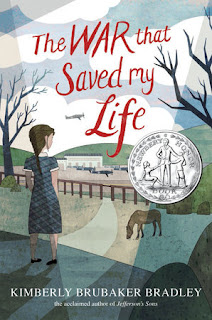 Britain is on the edge of joining World War II and after threats by the Germans the government decides that children living in London must be evacuated to the countryside. Ada lives in London in a one room apartment with her mom and younger brother. Born with a club foot that was never fixed, Ada is hidden away from the rest of the world and ostracized by her mother. When hearing of the evacuation notice, her mother decides Ada will stay while her brother Jamie is sent away. Against her mother's wishes, Ada joins Jamie on the day of evacuation and both arrive in the town of Kent. They are placed in the care of Miss Smith who is reluctant to take on the children. Gradually, Ada and Jamie settle into their new temporary home and Ada forms a strong bond with Miss Smith's pony Butter, teaching herself to ride the pony the best she can. Miss Smith shows confidence in Ada and Jamie; her home a completely different environment where both children are allowed to flourish. Their new formed family doesn't last long as Ada's mother arrives in Kent and forces her children to return home to London with her. Bombs are still dropping on the streets of London and the situation is precarious. Suddenly thrust back into the same conditions she endured before, Ada is determined to rescue her brother and herself for good this time.

Posted by DeepikaT at 11:21 No comments: